A Deep Dive into Kubernetes Scheduling

Kubernetes Scheduler is one of the core components of the Kubernetes control plane. It runs on the control plane, and its default behavior assigns pods to nodes while balancing resource utilization among them. When the pods are assigned to a new node, the kubelet running on the node retrieves the pod definition from the Kubernetes API. Then, the kubelet creates the resources and containers according to the pod specification on the node. In other words, the scheduler runs inside the control plane and distributes the workload to the Kubernetes cluster. It’s possible that you’ve never checked Kubernetes Scheduler’s logs or configuration parameters because, for the most part, the tool works well for the majority of development, testing, and production cases.

This article will take a deep dive into Kubernetes Scheduler, starting with an overview of scheduling in general and scheduling eviction with affinity and taints. We’ll then discuss the scheduler’s bottlenecks and the issues that you may run into in production. Finally, we’ll examine how to fine-tune the scheduler’s parameters to suit your custom-tailored clusters.

An Overview of Scheduling

Kubernetes scheduling is simply the process of assigning pods to the matched nodes in a cluster. A scheduler watches for newly created pods and finds the best node for their assignment. It chooses the optimal node based on Kubernetes’ scheduling principles and your configuration options.

The simplest configuration option is setting the nodeName field in podspec directly as follows:

The nginx pod above will run on node-01 by default. However, nodeName has many limitations that lead to non-functional pods, such as unknown node names in the cloud, out of resource nodes, and nodes with intermittent network problems. For this reason, you should not use nodeName at any time other than during testing or development.

If you want to run your pods on a specific set of nodes, use nodeSelector to ensure that happens. You can define the nodeSelector field as a set of key-value pairs in ‘PodSpec’:

For the nginx pod above, Kubernetes Scheduler will find a node with the disktype: ssd label. Of course, the node can have additional labels, and Kubernetes already populates common labels to the nodes kubernetes.io/arch or kubernetes.io/os. You can check the complete list of tags in the Kubernetes reference documentation.

The use of nodeSelector efficiently constrains pods to run on nodes with specific labels. However, its use is only constrained with labels and their values. There are two more comprehensive features in Kubernetes to express more complicated scheduling requirements: node affinity, to mark pods to attract them to a set of nodes; and taints and tolerations, to mark nodes to repel a set of pods. These features are discussed below.

Node affinity is a set of constraints defined on pods that determine which nodes are eligible for scheduling. It’s possible to define hard and soft requirements for the pods’ node assignments using affinity rules. For instance, you can configure a pod to run only the nodes with GPUs and preferably with NVIDIA_TESLA_V100 for your deep learning workload. The scheduler evaluates the rules and tries to find a suitable node within the defined constraints. Like nodeSelectors, node affinity rules work with the node labels; however, they are more powerful than nodeSelectors.

There are four affinity rules you can add to podspec:

These four rules consist of two criteria: required or preferred, and two stages: Scheduling and Execution. Rules starting with required describe hard requirements that must be met. Rules beginning with preferred are soft requirements that will be enforced but not guaranteed. The Scheduling stage refers to the first assignment of the pod to the nodes. The Execution stage applies to situations where node labels change after the scheduling assignment.

Check out the following example to help you grasp these affinities:

The nginx pod above has a node affinity rule indicating that Kubernetes Scheduler should only place the pod to a node in the us-east region. The second rule indicates that the us-east-1 or us-east-2 zones should be preferred.

Not all Kubernetes nodes are the same in a cluster. It’s possible to have nodes with special hardware, such as GPU, disk, or network capabilities. Similarly, you may need to dedicate some nodes for testing, data protection, or user groups. Taints can be added to the nodes to repel pods, as in the following example:

With taint test-environment=true:NoSchedule, Kubernetes Scheduler will not assign any pod unless it has matching toleration in thepodspec:

Taints and tolerations work together to make Kubernetes Scheduler dedicate some nodes and assign only specific pods.

Although Kubernetes Scheduler is designed to select the best node, the “best node” can change after the pods start running. As a result, there are potential issues with pods’ resource usages and their node assignments over the long run.

“Noisy neighbors” are not specific to Kubernetes. Any multitenant system is a potential residency for them. For example, let’s assume you have two pods, A and B, running on the same node. If pod B tries to create noise by consuming all of the CPU or memory, pod A will have problems. Luckily, setting resource requests and limits for containers keeps neighbors under control. Kubernetes will ensure that the containers are scheduled for their requested resources and don’t consume more than their resource limits. If you’re running Kubernetes in production, you’ll want to set resource requests and limits to have a reliable system.

Out of Resources for System Processes

Kubernetes nodes are mostly virtual machines connected to the Kubernetes control plane. Thus, the nodes also have their own operating systems and related processes running on them. If Kubernetes workloads consume all of the resources, the nodes will not operate and will run into problems. You need to set reserved resources in kubelet with the flags –system-reserved to prevent this.

If Kubernetes Scheduler cannot schedule a pod to an available node, it can preempt (evict) some pods from nodes to allocate resources. If you see pods move around the cluster without specific reasons for doing so, consider defining them with priority classes. Similarly, if your pods are not scheduled and are waiting for other pods, you need to check their priority classes.

In the following example, the priority class will not preempt any other pods for itself:

You can assign priority classes to the pods in their podspec this way:

The diagram below illustrates the flow of phases and extension points: 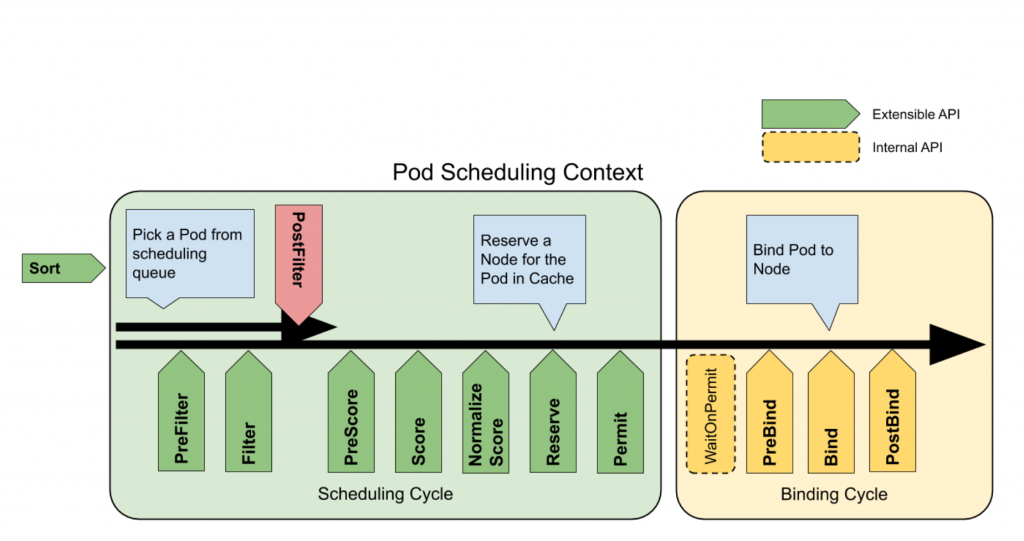 The following points in the workflow are open to plugin extension:

Plugin extensions implement the Plugin API and are a part of Kubernetes Scheduler. You can check the interface in the Kubernetes repository. A plugin is expected to register itself with its name as follows:

The plugin also implements the related extension points, as shown below:

Kubernetes Scheduler has a workflow to find and bind a feasible node for the pods. The scheduler’s workload increases exponentially when the number of nodes in the cluster is very high. In large clusters, it can take a long time to find the best node. To fine-tune the scheduler’s performance, find a compromise between latency and accuracy.

The percentageOfNodesToScore sets a limit to the number of nodes to calculate their scores. By default, Kubernetes sets a linear threshold between 50% for a 100-node cluster and 10% for a 5000-node cluster. The minimum of the default value is 5%. It ensures that at least 5% of the nodes in your cluster are considered for scheduling.

In the example below, you can see how to set the threshold manually by performance tuning the kube-scheduler:

It’s a good idea to change the percentage if you have a massive cluster and your Kubernetes workloads don’t tolerate the latency caused by Kubernetes Scheduler.

This article covered all aspects of scheduling in Kubernetes. We started with configurations for pods and nodes, including node selectors, affinity rules, taints, and tolerations. We then covered Kubernetes Scheduler’s framework, its extension points, and its API, as well as the resource-related bottlenecks that can occur. Finally, we presented the tool’s performance tuning settings. Although Kubernetes Scheduler works out of the box to assign pods to nodes, it is essential to know its dynamics and configure them for a reliable, production-grade Kubernetes setup.

Change is part of DevOps history Starting with the merge of Development and Operations teams, the DevOps role is...
Read More

Covid-19. What History can Teach IT about Leading Through this Difficult Time

TLDR: IT finds itself in the driver’s seat for guiding businesses through these uncertain times With the...
Read More

Introduction to the Infamous Python GIL

If you’ve worked within the Python ecosystem for a while, chances are you've heard complaints about its...
Read More
Scroll to top
Skip to content